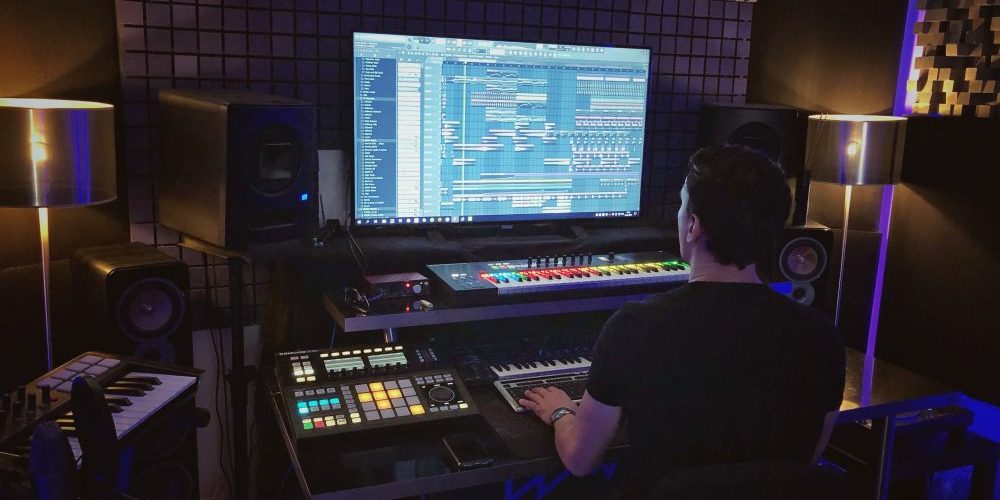 If you are new to the world of DJing and Producing, you will come across a lot of terms that you probably don’t know yet. Fortunately, we have made a list for you with the most important terms to know.

DAW stands for Digital Audio Workstation. Your DAW is the program you work in. So if you create your songs in Logic Pro X, the DAW you work in is Logic Pro X.

More examples of a DAW are FL-Studio, Ableton Live and Cubase.

If you are already a DJ before you start producing, you will undoubtedly know this term. BPM stands for Beats Per Minute. As the abbreviation actually says, the BPM indicates how often you hear a beat in a minute. This indicates the speed of the song.

This is one of the first things you set when you start a song. Your BPM says a lot about the song. A slightly too high BPM can make it too busy and a too low BPM may not make your song swing enough.

Your BPM often also determines the genre. Most songs within a genre keep roughly the same BPM so that DJs can mix them well.

Below are some genres with their most common BPM’s.

You will come across this name a lot. The name makes it easy to remember what it is. In the past, a device for an operation had to physically “Plug In” into your mixer. That is why it is now called a “Plug-In”.

An effect is an operation on an existing sound that you usually apply by means of a Plug-In.

You can think of the following operations:

Dry-wet is a button that you can find on many Plug-In’s. With this button you specify the relationship between the processed sound and the unprocessed sound. If you have this button set to 0, it will sound like your Plug-In is doing nothing at all. With the Dry-Wet knob set to 100%, your Plug-In has taken over the entire sound.

These are elements to fill your number with. This can be anything from the noise that builds up to the drop of your song to lazer noises to make your song more interesting.

A sample is a single pre-recorded sound (building block) that you can use in your song. This can be a drum sound but also a single note from a synthesizer.

In the past you often had to “steal” a sample that you like from another song. Fortunately, nowadays you can get entire packages with samples in different ways.

You can use a loop to have a part of your song repeat so that you can hear what you are doing without constantly having to rewind.

With most DAWs you can indicate the part that he has to repeat at the top of your timeline. If you want to repeat a sound through your song, this is also called a loop.

This type of loop is a ready-recorded piece of music that you can edit and use in your own song. For example, you can think of a “drum loop” or a “bass loop”. These are called loops because they are often only 8, 16 or 32 beats long. Then you often have to repeat them to fill up your number.

The synthesizer is the small program or physical device with which you make your sounds. As the name suggests, you create synthetic sounds with a Synthesizer, so sounds that you have not recorded in the real world. A synthesizer consists of various parts with which you can mold the sound to what you want. To compare it with other music: your synthesizer is your “guitar”, “piano” or “flute”. You can make a song with several instruments together.

Presets are ready-made settings for your Plug-In or synthesizer. Many Plug-Ins and synthesizers contain a whole library of these. When you load a presets, all buttons on the synthesizer are moved to how they were stored in the preset. Presets are especially ideal if you want to quickly capture your inspiration, then you can later perfect the sound to how you want it.

LFO stands for Low Frequency Oscillator. It also creates a wave, but at a very low frequency. Your human can often not hear such a low wave, but as a producer you can use it for other things. For example, you can use this wave to constantly make a certain button go back and forth. On the LFO set various things such as the precise frequency and shape of the wave.

With automation you can set how a certain button moves through your number. Similar to how an LFO does that. The difference with the LFO is that an LFO repeats itself and that with an automation you have full control over how that button moves through your number. You can also apply an automation to almost any button in your DAW, Plug-In or synthesizer. You can only use an LFO if your Plug-In or synthesizer has it built in.

As exciting as it sounds, the Master Channel is actually pretty basic. The master is the channel where all the sounds from your song come together. There you can do the final edits on your song as a whole. When you save your song as a sound file, you record what comes out of your Master Channel. DJs will know the master as the output going to the speakers that your audience hears.

A frequency indicates how quickly something happens. How often a sound wave goes back and forth, for example. This is indicated by Hertz (Hz). if a sound wave goes up and down 200 times in a second, that is a sound wave at 200Hz. You can display all frequencies that you hear in your song at a certain time in a spectrum, which you can often find in an Equalizer. In a spectrum you can see exactly which frequencies are present in your song and often you can see the annoying ones and remove them.

With an Equalizer you can really mold with your sound. You can amplify or soften certain frequencies from your sound. With most modern Equalizers you do this by drawing a graph. This graph is probably easier to understand than you expect. If you draw the graph higher on the left, the low tones (Bass) will be louder and if you draw the graph lower on the right, the high tones will be softer.

For example: if you set your low cut to 200hz, all frequencies below 200hz will be filtered out. Most DJs will know this term as a filter.

You can think of a MIDI track as the digital form of sheet music. In a MIDI track it is noted which notes are played at what time. Your MIDI track also records how hard a note should be played. You can actually see a MIDI track as a virtual keyboard that does what you told it to do in advance.

A compressor is an effect that makes all soft sounds louder and makes all loud sounds softer. With this you can often mix sound with each other so that they sound like 1 sound.

You often also use a form of compressor when finalizing your song, to prevent your song from sounding too quiet while playing or on the radio. Keep in mind that this removes dynamics. That is why it is best to use as little as possible with, for example, a sensitive piano solo.

What this actually means is that you let your sound go too loud on purpose and in a controlled manner so that it starts to distort. Own as if you were turning your speakers on too hard. Usually you try to prevent this, but with some sounds that is of course very cool and exactly what you want. Often a distortion also causes the volume of the sound to go very loud, to compensate for this, it is best to turn down the output of the distortion Plug-In.

Swing can be applied to the notes or sounds in your song if you want to make it sound a bit more human. With swing, your notes or sounds are controlled just a tiny bit out of time so that it doesn’t sound like a robot played it in.

With a reverb you can give the listener the impression that he / she is in a certain room. With a short reverb it looks like you are in a small space and with a long reverb it feels like you are standing in a large factory hall. A reverb is often confused with an echo. Even though they often show up in the same situation in real life, they still sound very different. An echo is a repeat of a sound that slowly fades and a reverb the same, but then it sounds as if the sound is bouncing off all the walls of the room very quickly.

You will often encounter Attack, Decay, Sustain and Release when producing. The (often) sliders for ADSR determine the envelope of a sound, which says how a sound behaves after a note is struck.

Here’s what each of those sliders do in the case of a volume envelope, the most common:

Attack: With attack you determine how long it takes before the sound is at its loudest volume.

Decay: With decay you indicate how long it takes for the sound to reach the volume it is holding.

Sustain: With sustain you indicate at what volume the sound will remain as long as the note is held down.

Release: With release you specify how long it takes for the sound to be silent after the note is released.

A pan that you use during production is very different from the one you use in the kitchen. Pan is used to make a sound deviate to a specific speaker. If you pan the sound to the left, the sound over the left speaker will be slightly louder than over the right speaker. With this you can make it seem that a sound is on a certain side.

Noise consists of completely random frequencies and often sounds like wind or wind. White noise means that you hear all audible frequencies at the same time. White noise can be added to your lead to give it a cool effect.