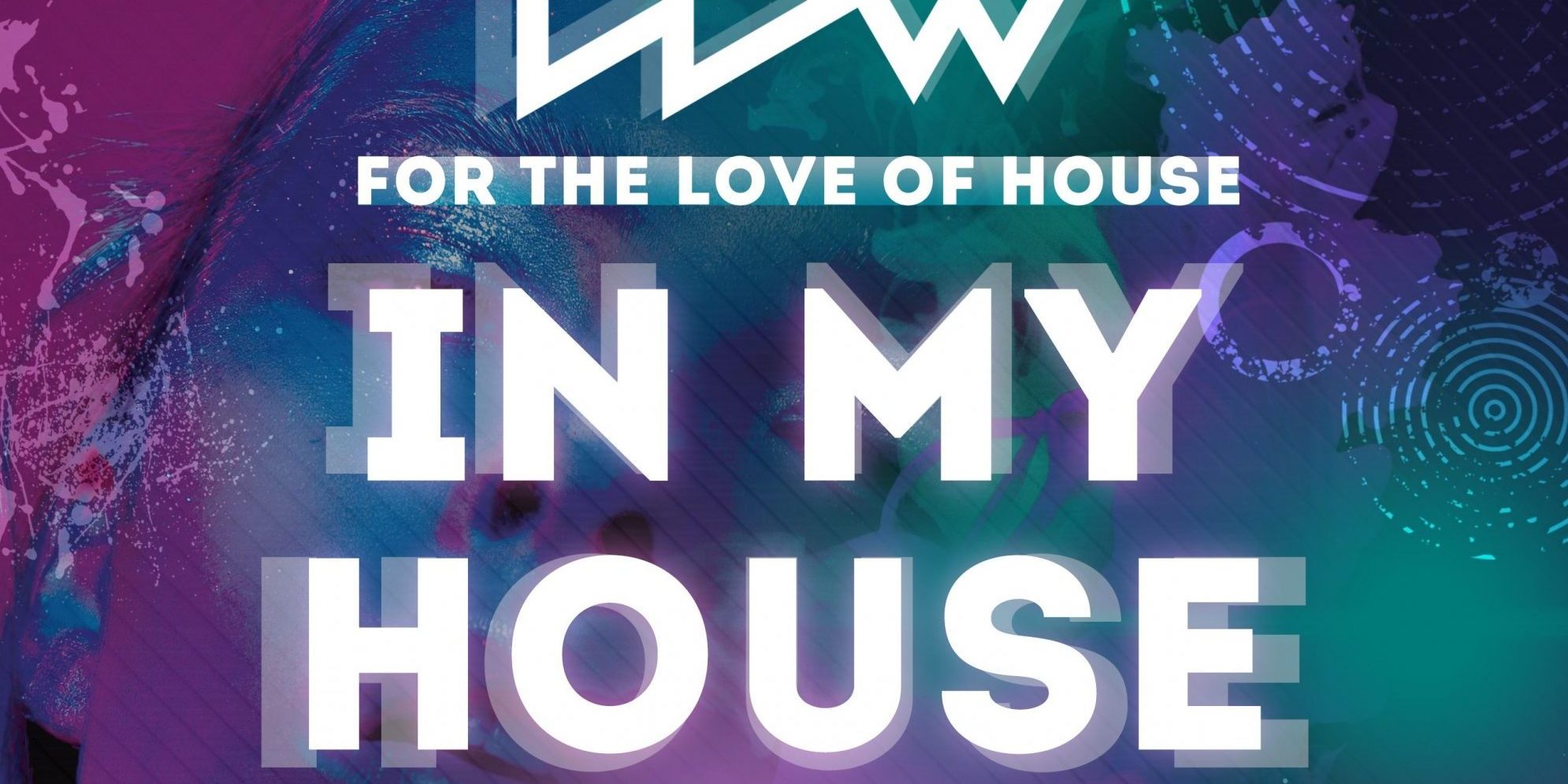 At the 6th of March there will be the second livestream of this year! We have 6 Dutch DJ World talents in the mix with the finest house music for 4,5 hour! And you all can watch the livestream at our YouTube channel. Meet our DJ’s: 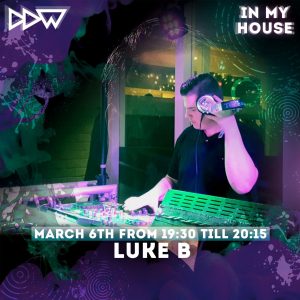 This is Lukas van den berg, also called LukeB and he is 19 years old. At the age of 7 he saw another DJ and thought, I want to be this too.

He saved up for a turntable and then played at parties until he was 10 years old. He stopped for a moment, but around the time that he worked backstage at parties and saw people perform and being in the spotlights, he got those itches again to start again at the age of 15.
From the age of 16 he took up his career seriously and since then he has been running as a resident DJ at Spits. He can play at all kinds of parties because all music makes him happy as long as he is allowed to play!

One of its highlights in Spits was with carnaval, that is one big party and it’s so much fun. Exactly how you can describe LukeB!
Weddings are also something beautiful for him, the atmosphere that hangs there is unreal, so much feeling, love and unity. Every event he continues to surprise the public again and again!

He prefers to play Tech house / House, he gets a huge energy boost from it! Performing makes him so happy, cheerful and enthusiastic. The atmosphere he creates with the audience is like a drug to him, it gives him goosebumps that he can be so in tune with the audience and create a bond with them.

It is important for him to touch people with his music, to make them feel good at a party. He has a passion for different music styles, he knows his songs through and through and he bases his songs on how the audience reacts. He likes it when he can surprise people with strong and surprising mixes, because the reactions of people makes him so happy.
His goal is to let YOU and the audience go completely loose! 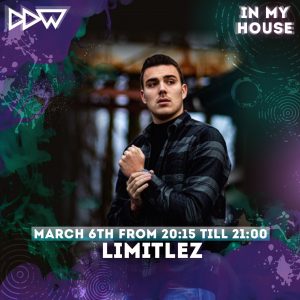 This is Limitlez, Lars Woudenberg and he is 21 years old. He is a DJ and Producer because all his passion is in the music. In his songs and performances, he can put all his feelings into it and convey it to the audience.
As a child he has always loved music. In the car he was always yelling along with the music. At the age of 12 he got his first turntable for his birthday, he took DJ lessons, but it wasn’t more than playing records in his room together with friends and making some mixtapes.

For a few years he didn’t do much with it, now and then he mixed some music, but it was nothing more. Until he was 18, one of his best friends said that they also liked mixing and to party. They started spinning together for a while and did some parties together. From that moment on he got the taste and itches to take his career more seriously.

In 2019 he and a friend found a program where you can produce your own music, he tried to master it, but didn’t really got any further. He ended up in Dutch DJ World together with Quaza and learned to produce and brought his turning and producing skills to a higher level.

He also learned a lot from spinning in the pub “Cafe de Zaak”, here he learned to respond to the public. Now he always tries to imagine himself standing between the audience and how he would react to the music. He tries to get as close as possible to the audience. He is always very enthusiastic and cheerful while playing! It gives him energy when the audience is enjoying a party.

The most important thing for him is that he can make people happy, that is possible by being there for them, but how great is it when you can do that with your own music? He puts all his feelings into his songs and he likes to share that with everyone.

He produces many different styles of music, ranging from Pop to Progressive House. He tries as many styles as possible to create a unique sound. Together with Quaza he released the song “I want your soul”. He has a lot of music ready which hopefully will arrive soon. There will be new tracks coming out, so stay tuned!

In the past 2 years he has produced and mixed a lot. This is his dream job and he wants to be able to make a living from his career as an artist, playing all-round is still the solution for now, but hopefully he will one day play his own music at festivals or clubs. That is the ultimate dream or rather, his ultimate goal! 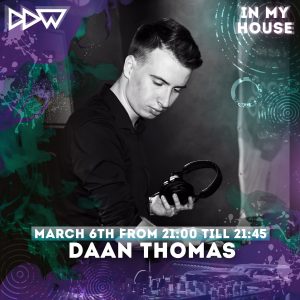 This is Daan Thomas, he is 22 years old and has been a DJ for more than 7 years. The mix of nervousness and happiness before his performances keeps the playing very interesting for him. He wants to play records that haven’t been released yet, but will this suit the audience? If a record goes well, you cannot imagine how happy it will make him!
His musical story starts as a 3 year old boy who was already jumping next to the radio like a DJ! At 8 years old he started playing the guitar, this is where the passion arose. When he was 15 years old, his sister gave a party and had 2 DJs, they weren’t very good and he thought “maybe I can do better”. Because of this he took DJ lessons, but really learned it in the pub. He had finished the DJ lessons, but how will he get bookings? He ended up at “Cafe Jeroen” where he has been a DJ for 5 years and has learned the real work.

At “Cafe Jeroen” he discovered what is the most important to him and that is to keep people interested and make people just want to party all night long! Mixing is also very important to him, tight mixes really make people look and say “wow”! The feeling that you start a record and everyone is having the time of their lifes gives him a huge adrenaline rush!

In his career he has been able to experience beautiful things such as performing for 2.500 people at the Pop and Dance festival. He released a track with a friend of his as a duo called “Play Heart”, that song is called “Lost Tonight” and has reached around 327,000 streams. His songs have also been played by artists such as Hardwell and Nicky Romero.

Progressive house used to be the style he loved to produce, now he’s turned that passion into that good music should be heard. He has set up a label “Rediscover Records” with Disco, Tech house and Progressive house records. It doesn’t matter how great the artist is. Good music really needs to be listened to!

Why he is a DJ is certainly not for sleep deprivation, haha! He is a DJ because he has a lot of love for music, that is something you can share with other people. The whole intention of being a DJ is that you can let other people enjoy and make them feel good! In his set you mainly hear Disco and Deephouse, where the energy levels have an upward trend! 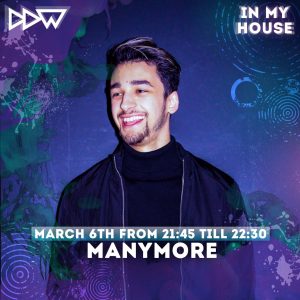 David Martino Eijsvogel, stage name: ManyMore, is a tech house producer / DJ at the age of 20. He was fascinated by music at a young age. His father and brother often played guitar, so he started playing guitar at the age of 11.

He started in the music industry in 2014 at the age of 13 when his father took over a club. He helped organize events and taught himself how to play a DJ Set. His events became very successful. He also started producing music, he and his brother took producer lessons at Dutch Dj World. After a while he was allowed to give Dj lessons to others himself.

At the Herman Brood Academy he developed further in producing music. Now that he graduated as a Dance Producer, he is working on an EP that he wants to release soon! 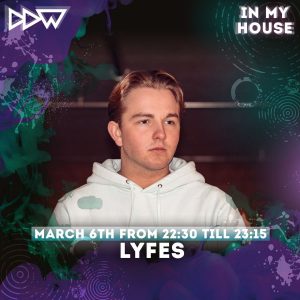 Laurens, going under the name Lyfes is a young producer and DJ from the Nederlands. His musically journey begun when he saw Afrojack playing in the Ziggo Dome in Amsterdam back in 2014. At that moment he was so overwhelmed by the melodies and that bass pumpin’ that he started making in his own music. After making some own music he start doing gigs at some local clubs in his hometown.

After that recognition Lyfes got back in to the studio, continuing to making new music, started realizing that this was his dream – making music and performing.
Finding his very own sound getting inspiration from hitmakers like Avicii and The Chainsmokers his poppy dance sound started to come alive.

“I’m so excited for what to come. Most part of 2020 I have been working in the studio, working on putting my signture on the sound of what’s gonna be Lyfes. I will continue to work hard in the studio, keep pushing my sound and vision further to take this to the next level!” 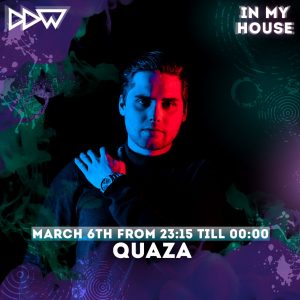 His name is Taco van der Werf, also known as Quaza and he is 21 years old. He prefers to be producing all day long, because he can put all his inspiration and feeling into it. And he never misses the opportunity to DJ his own productions.

His musical journey starts with Chapter 1, he was a music lover since childhood. It started when he tried to make music with a software online and at school. Ultimately, he seriously started taking lessons at Dutch DJ World in 2018, because he wanted to develop further in making music. During the lessons at DDW he started to learn how to produce step by step. After two years, in 2020 he starts to find his own sound. Now he tries new things and makes more songs. You can see and hear the development and progress he makes in his productions. For him it is important that he first develops his own sound before releasing his music. So are there new songs coming up? “I think 2021 will be a great year!”, He says.

For him there are no boundaries in music, it is important that you make what you feel comfortable with. There is also no limit to what he wants to make, he lets him be inspired by his creativity and starts producing according to what his feeling tells him. He mainly produces EDM and Basshouse.

Every performance he has done so far is an important point in his life for him from playing on a live stream to finishing songs he is proud of. It is all a complete whole!

He and the audience together create a festive atmosphere, the feeling that you hope the evening will not end. He gets a lot of energy from the music he plays and that everyone is getting loose on his music. That always makes him happy!